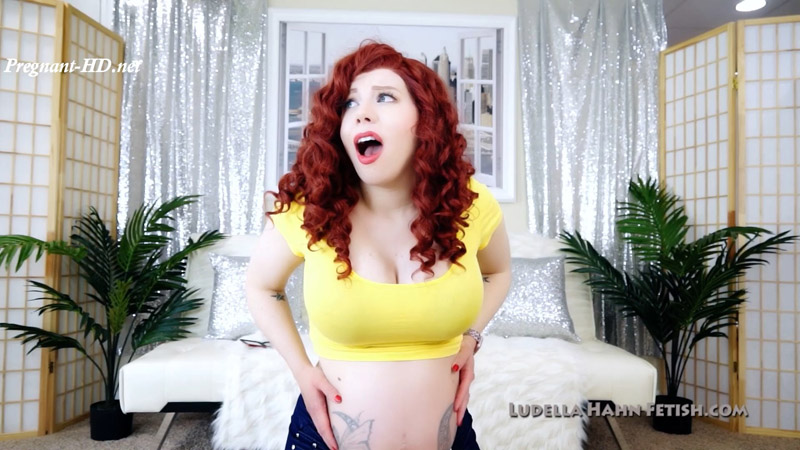 Ludella is playing a game in her apartment when she hears a strange noise. A glow of light surrounds her and she’s taken up into a UFO and flown away. Within mere minutes she’s dropped back into her apartment. She starts feeling her body to make sure she’s all there, and when she touches between her legs she winces in pain. “What just happened.? I think I was… taken by Aliens! I sound like a crazy person.no one is going to believe me. But… it felt so real.” She looks down at her nintendo DS which is still on. “My game is still on? But, it felt like I was gone for a week.” She looks at her watch. “I was only gone 5 minutes?”

“I think I was. ugh… it was so slimy… and big.” She remembers. Then she keels over in pain. “I think I’m going to be sick.” She runs off screen and is sick. When she returns, her thin belly begins to rapidly grow until she has a big pregnant belly. “I’m pregnant? So… it really happened… He put his big slimy alien dick inside me… and now I have an alien growing inside me. Ugh! I can’t just go to the hospital and give birth to an alien. And what is my mom going to say? ‘Well, you weren’t pregnant when I saw you a week ago!’ Ugh! What am I going to do.?”

Her belly starts to move around from the alien moving inside her and she gasps, horrified at the size and suddenness of this all. She can’t believe this is happening to her…and nobody is going to believe her. But soon she feels a warmth and glow and becomes happy about the creature growing inside her. She caresses her pregnant belly lovingly, deciding that she’ll love it no matter what it looks like. But then she’s in pain again as it grows even bigger. She falls back onto the couch, moaning in pain from sudden contractions. “I think I’m giving birth already. ohhhhhh.” She moans loudly as she’s surrounded by a glowing light and soon disappears, teleporting up to the flying saucer above her building.

In what seems like just a minute, she drops back into her apartment. Her body is thin again. “They just took it? They just used me like some kind of vessel to grow their human-alien hybrid and then discarded me?” She’s distraught, but then the sound comes back and the glowing light and fear fills her face. “No… no! Please stop doing this! Stop doing this to me.” But she’s taken again to be used by the aliens…